Accueil > News > Budget and Spending Review of the UK governement – October 2021: What you need to know

Budget and Spending Review of the UK governement – October 2021: What you need to know 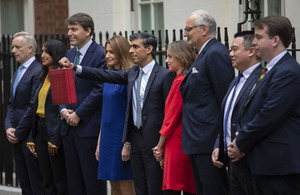 The Chancellor of the Exchequer, Rishi Sunak, today presented the Budget for 2021 and a multi-year Spending Review to the House of Commons.

The Budget and Spending Review set out the Government’s plan to make the economy stronger by investing in public services, supporting growth, driving the transition to net zero, taking advantage of the opportunities offered by leaving the European Union and ensuring that public finances remain sustainable. At the heart of this strategy is the upgrading of the economy across the UK.

Rishi Sunak said: “The Budget I am presenting today does not draw a line under Covid because the months ahead will be difficult… But it begins the work of preparing for a new post-Covid economy. An economy with higher wages, skills and productivity. An economy with stronger public services, more vibrant communities and safer streets. An economy made for a new age of optimism.

The Chancellor presented a new charter for fiscal responsibility based on the following rules, which aim to keep public finances under control while allowing flexibility to respond to future crises, fund public services and lay the foundations for strong growth in the medium term.

Net public debt (excluding the impact of the Bank of England) will have to fall as a percentage of GDP.
in normal times, the government will only need to borrow to invest in future growth and prosperity, with the current budget being balanced (current expenditure being financed by taxation) by the end of the third year of the forecast period.
Net public investment should not exceed 3% of GDP on average over the forecast period.

It made four resolutions:

To respect the budgetary rules with a safety margin to protect against economic risks.
Continue to support working families.
Improving the fiscal position goes hand in hand with meeting commitments to the world’s poorest: development aid should rise to 0.7% of national wealth by 2024-25.
Increase total departmental spending by £150 billion over the parliamentary term, an annual increase of 3.8% in real terms. This means that each department will see its spending increase in real terms over the course of the Parliament.

Confirmation that £30 billion will be invested in the green revolution, including energy, industry, transport and buildings – in line with the Net Zero Strategy announced last week – including
A £6.1 billion transport decarbonisation plan to increase the number of zero-emission vehicles, develop low-energy planes and ships and encourage travel by bus, bike or on foot.
3.9 billion will be spent on decarbonising buildings, half of which will help low-income families reduce their energy bills and support them in their transition to net zero.
1.7 billion to develop a large-scale nuclear project for which a final decision will be taken during the current Parliament.
Additional resources for the health system, including funding for the Covid response, investment, R&D, and staff training: £5.9 billion will be allocated to the National Health Service (NHS) to help it respond to the delays in care caused by the pandemic.
Investment in infrastructure (roads, rail, digital), innovation and skills to address regional economic disparities. Spending on skills will increase by 26% in real terms over the term.
Increase in education spending.

A 6.6% increase in the minimum wage to £9.50 per hour (€11.26) from 1 April 2022.
Improving the Universal Credit scheme to support those in work.
Increased spending on research and development to £20 billion a year or 1.1% of national wealth by the end of the Parliament (2024-25). This will represent an increase of a quarter in real terms.
The scope of R&D tax credits will be extended to data and cloud spending and tax credits will be refocused on the UK.
Lowering local business taxes by £7 billion over the next five years, including: a new investment allowance to encourage businesses to adopt green technologies such as solar panels; a building improvement allowance from 2023; allowing a business to expand without incurring a marginal tax increase; and a 50% reduction in taxes for businesses in the retail, leisure and public access sectors
Following the exit from the European Union: modernisation of the tonnage tax to ensure that the shipping industry remains globally competitive and a major overhaul of alcohol taxes which will increase on hard liquor but decrease notably on sparkling wine. This reform aims to simplify the system and will come into force in February 2023.
Freeze on alcohol and fuel taxes.

If you wish to read the complete report click here.