Rugby World Cup 2023: After being chosen to be the base camp of the England team, Le Touquet-Paris-Plage welcomes the France 2023 Rugby Tour and hosts the World Cup this Sunday 24 July!

Since a few days and during the next 4 months, a train will criss-cross France and its territories to promote the Rugby World Cup 2023 and celebrate the event. 51 cities, over 144 days of tour, will be crossed by the France 2023 Rugby Tour and Le Touquet will be one of them.

Come to Etaples-Le Touquet station on Sunday 24 July from 9am to 6pm (free admission) to visit the Rugby World Cup 2023 exhibition train. On board, the opening match between France and New Zealand will take centre stage, and an immersive virtual reality experience will plunge you into the atmosphere of 8 September 2023 at the Stade de France.

The Webb Ellis Trophy as a guest star!

The highlight of the day will undoubtedly be the presentation of the 2023 World Cup, the famous WEBB ELLIS Trophy, awarded to the winner of the tournament since 1987! This guest star will be received on Sunday 24 July from 9am to 12pm in the main lounges of the Hôtel de Ville!

The presentation will be open to the public and free of charge, which will delight French and international rugby fans who will also be able to attend a beach rugby tournament from 10am. 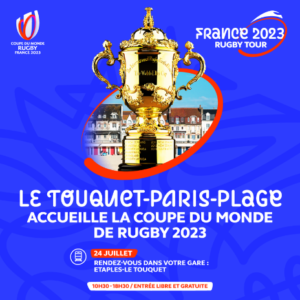