In the economic world, in order to survive, companies have to turn their difficulties into positive challenges and opportunities every day. Representing an ecosystem of 2,000 French and British companies, the Franco-British Chamber firmly believes that Brexit is a threefold opportunity:

First of all, Brexit should allow us to reaffirm the historical and influential economic relations between our two countries. In 2018, trade between France and the United Kingdom represented 97 billion euros in know-how, skills, talent and joint projects in all the economic sectors. Today, we must strengthen this shared business vision to create value and build collective intelligence. At a time when States are divided, companies are uniting!

Brexit is also an opportunity to enhance the attractiveness of our two countries to the rest of the world. By declaring that they want to invest in France, 86% of major foreign business leaders have effectively affirmed their confidence in France’s assets. For 25 years, the United Kingdom has been the country attracting the most foreign investment and it remains an attractive country. Today, however, France’s economic attractivity has never been so great, allowing companies and talents to seize fantastic opportunities. Without arrogance but with determination and confidence, let us be bold and assert our expertise and skills on the global business chessboard! 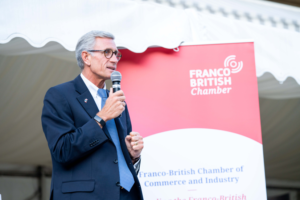 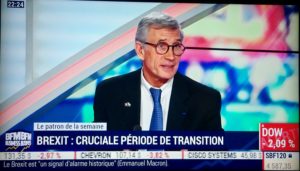 As in the business world, “It is time to define a Vision (next 10 years), a Strategy (next 5 years) and an action plan (Next 2/3 years)”. We have to transform this formidable European diversity into a dominant and inescapable economic power, with 500 million consumers!

Remember that the future generations are watching us

Europe is their home and the world their oyster ….

Let’s not let these opportunities pass us by!

President of the Franco-British Chamber